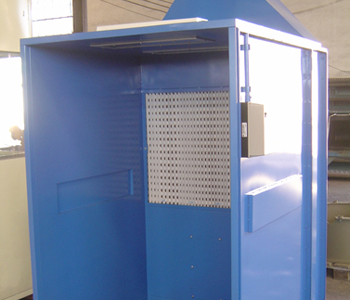 is the better baffle to remove liquid particulates from an air stream.  The cardboard baffle is easily cut to fit most any exhaust opening and is often used as a pre-filter.  Long life and ease of disposal are but a few advantages of The Accordion.  Buy a better baffle. Buy The Accordion for your next filter change.

The Accordion is designed to capture overspray and retain it outside of the air stream. The baffle separates particles from the airflow using the principle of inertial separation.  The inertia of forward motion causes the particles to impact on the back walls as air flow is diverted through a series of directional changes within the baffle.  Particulates collect in deep two inch pockets outside of the air stream.  Face loading behavior that causes uneven airflow, boil back and particle migration is eliminated.

As a result of constant airflow that moves evenly across the filtration area, filter life is extended to hold over 6 pounds per square foot of filter.  The maximum recommended pressure is limited by the power of the fan motor and could be ran up over 1 inch w.c.

The Standard Baffle is a single stage filter with over 98% paint arrestance efficiency, as tested per ASHRAE 52.1 using a baked enamel test coating.  Not only an excellent stand-alone filter but even more effective as a pre-filter to a final stage media, The Accordion Standard Baffle is best used with slow-drying coatings such as high solid enamels, epoxies, asphalts, varnish and other tacky-dry coatings with larger particle size characteristics.

The Poly-Back Baffle is a two-stage filter capable of collecting over 99% of the particulates in an air stream.  The Poly-Back is designed to capture airborne liquid particulates and air dried fines using inertial separation and secondary straining.  The unique poly blend is the perfect balance of fibers and space to capture the maximum particulates before plugging the polyester.

Not just a stand-alone filter, the The Poly-Back can be used as the first and second stages of a three stage system as required in aerospace applications.  The Poly-Back Baffle is best used with air dried liquid coatings such as enamels, primers, urethanes and other flash dry coatings with fine particle size characteristics.